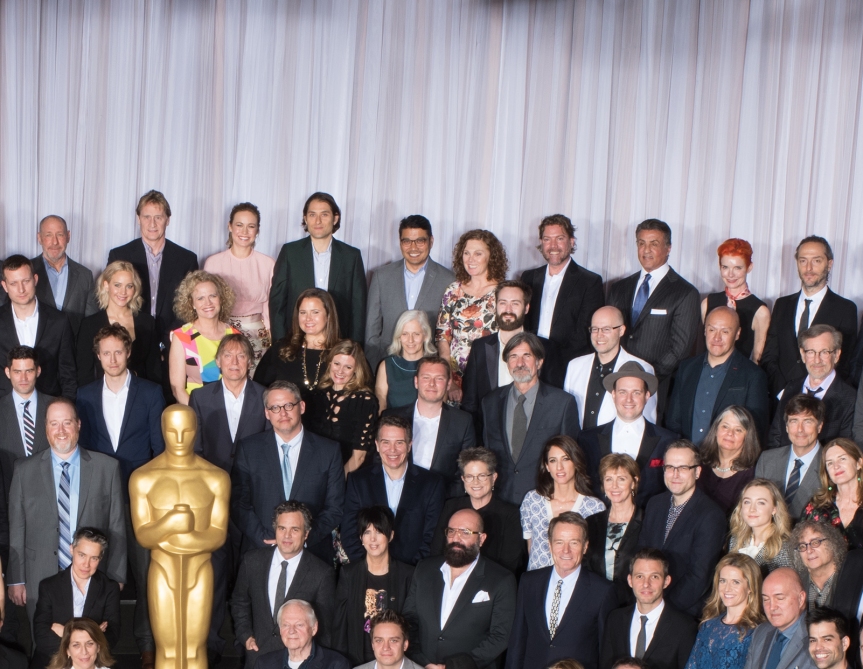 While scrutinizing this year’s official Academy Award class photo, my eye was immediately drawn to red…not just those few actresses wearing scarlet-hued dresses, but also the neon crimson hair of costume designer Sandy Powell. It’s appropriate that color would draw the eye to her, as she used it to create some of this year’s most stunning and effective costume designs, including the instant classic Cinderella gown made up of many layers of painstakingly dyed blue fabrics. She is pitted against herself with two 2015 nominations, one for Carol, the other for Cinderella. Not so coincidentally, in both she dressed Cate Blanchett. The last time the two worked together, for 2004’s The Aviator, both took home Oscars (Blanchett for her portrayal of Katharine Hepburn).

END_OF_DOCUMENT_TOKEN_TO_BE_REPLACED

“I’m very enthusiastic about the Academy Awards because if there were no Oscars, we wouldn’t have as many good movies as we do have.” – Robert Osborne

The Oscars — both maligned and praised — are always cause for celebration and we’re here to do just that.

For the fourth consecutive year Paula’s Cinema Club (my Twitter handle @Paula_Guthat) joins forces with Kellee (@IrishJayHawk66) of Outspoken & Freckled and Aurora (@CitizenScreen) of Once Upon A Screen for the 31 Days of Oscar Blogathon, running February 6-27, 2016.  We started this event to coincide with Turner Classic Movie’s 31 Days of Oscar marathon, during which the network shines the spotlight on the storied history of the Academy Awards. All the deets, including participating blogs & their chosen topics, after the jump…

END_OF_DOCUMENT_TOKEN_TO_BE_REPLACED

I totally ran out of time for a year-end music post in 2014 (the last one was published in 2013), but they are just too much fun to put together, so here’s the 2015 edition. The cutoff is 50 or more plays (as in previous years, the source here is my iTunes). These are songs that I loved this year; though some were released before 2015, but almost all of these reached triple-digit plays. I don’t do a lot of description of these, they are in no particular order, and linking instead of embedding is not indicative of preference (it just means I couldn’t get it to embed). I feel like if you actually take a chance by clicking and listening to the songs, you’ll hear why they made the list. There’s a WTF factor to some of my choices, so go ahead…read on and judge away after the jump. You can also check out the 2012 list.

END_OF_DOCUMENT_TOKEN_TO_BE_REPLACED

WE’RE BACK for number 4!

The WHAT A CHARACTER! Blogathon honors the players who rarely got leading parts, exhibiting instead a versatility and depth many leading actors wished they had. Aurora, Kellee, and I never tire of seeing them show up in films or paying tribute to their talents, and as the previous three installments of this event have proven, neither do you.

And so here I am with Day 1 of the 4th annual WHAT A CHARACTER! I know you can’t wait to read all the fabulous posts. Before you jump in though, we’d like to thank all the participants for their understanding as we re-scheduled the blogathon from last weekend due to world events. We really appreciate your patience.

END_OF_DOCUMENT_TOKEN_TO_BE_REPLACED

UPDATE – November 21: WHAT A CHARACTER! Day 1 Posts are here.

UPDATE – November 13:
The WHAT A CHARACTER! Blogathon has been postponed until next weekend, November 21-22-23. We will promote everyone’s post as usual during those three days. Thank you for your patience and understanding.

WE’RE BACK for number 4!

WHAT A CHARACTER! — a phrase borrowed from Turner Classic Movies (TCM) so that we could dedicate a blogathon to those whose names few remember, but whose faces are familiar – honors the players who rarely got leading parts, exhibiting instead a versatility and depth many leading actors wished they had. Aurora, Kellee, and I never tire of seeing them show up in films or paying tribute to their talents, and as the previous three installments of this event have proven, neither do you. So here we are with the fourth annual WHAT A CHARACTER! Blogathon.

END_OF_DOCUMENT_TOKEN_TO_BE_REPLACED

This guest post by frequent contributor Jack Deth is part of the Classic Movie History Project Blogathon, hosted June 26-28 by Movies Silently, Silver Screenings, and Once Upon A Screen.

Greetings all and sundry!

When receiving an invitation from our gracious hostess, Paula, to indulge in a favored pasttime and add to many and varied perspectives of Cinematic History, I would be remiss if I didn’t break out a fresh set of coveralls, miner’s cap, and excavation tools to dig deep and rummage about neglected corners of massive archives, tales, anecdotes and personal experience regarding a visionary and trailblazer of cinema from the late 20th Century to the present. Though, not in an arena most would expect. So, allow me a few moments to align, refine and define…

Roger Corman: Rebel, Pioneer. The Guy With The Arrows In His Back!

One may ask where a transplanted Michigander, graduate of Beverly Hills High and Stanford University, with a degree in Industrial Engineering in hand, got his start and first taste of 1947 Hollywood and “The Film Business”? Why, in the Mail Room at Twentieth Century Fox, of course!

END_OF_DOCUMENT_TOKEN_TO_BE_REPLACED

This past weekend, our theater Cinema Detroit was a venue for the fourth annual Cinetopia International Film Festival, which brings “the best films from the world’s best festivals” to Detroit and Ann Arbor every June. It was our second year as a Cinetopia venue and while all the films on our slate were worthwhile, I’m highlighting five of my favorites. Keep an eye out for these if you haven’t seen them already.

END_OF_DOCUMENT_TOKEN_TO_BE_REPLACED

To paraphrase a common saying, writing about cinematography can be like dancing to architecture. But I’m going to give a shot, because it’s a travesty that Roger Deakins, ASC, BSC, CBE has been nominated for the Best Cinematography Oscar a whopping TWELVE times, and has yet to win.

With his nomination this year for his work on Angelina Jolie’s Unbroken, Deakins is on a three-year streak, having also gotten the nod for Skyfall in 2013 and Prisoners in 2014. He’s been nominated for Academy Awards in two consecutive years THREE times (1997/1998, 2001/2002, 2008/2009), was once nominated twice in the same year (2008), and he’s won numerous other awards, including BAFTAs and ASC and BSC awards.

Deakins is known for his simple, naturalistic set-ups and his devotion to story over all other considerations. He likes silhouettes, fire at night, and high angles, but his shots almost never draw attention to themselves, which may be part of the reason it’s never been his year with the Academy.

He is most often associated with the Coen brothers, with whom he has worked on eleven pictures (not all Oscar-nominated). Their work has benefited greatly from his fluency with different lighting styles.

I was overwhelmed by the thought of analyzing the circumstances that have kept Deakins from the podium in the past, so I’ve chosen to spotlight briefly just a few of his amazing Oscar-nominated works. You know them, even if you’ve never heard his name. For instance…

END_OF_DOCUMENT_TOKEN_TO_BE_REPLACED

Another relatively unknown gem we are presenting at Cinema Detroit…if you dig breathtaking B & W cinematography, you owe it to yourself to see THE BETTER ANGELS on a big screen.

All that I am, or hope to be, I owe to my angel mother. — Abraham Lincoln

At an isolated log cabin in the harsh wilderness of Indiana circa 1817, the rhythms of love, tragedy, and the daily hardships of life on the developing frontier shaped one of our nation’s greatest heroes: Abraham Lincoln. Abe is a thoughtful and quiet boy who spends his days at the side of his beloved mother (Brit Marling) while learning to work the land from his stern father (Jason Clarke). When illness takes his mother, Abe’s new guardian angel comes in the form of his stepmother (Diane Kruger), who sees the potential in the boy and pushes for his further education.

Produced by Terrence Malick and filmed in glorious black and white, The Better Angels sheds new light on the little-explored formative years of the legendary president as well as the women who shaped…