With a ton of alternate titles and a couple different versions (U.S. and U.K.), this film based on the short story “Casting the Runes” by M.R. James is both genuinely creepy and a fitting part of Turner Classic Movies’ tribute to Peggy Cummins, who passed away on December 29, 2017 at the age of 92. If you haven’t seen it, or even if you have, you ought to, plus it’s the TCM Party tonight at 9:45 p.m. Eastern with guest host Jim Phoel aka @DraconicVerses.

It’s got some really gorgeous black-and-white cinematography by Edward Scaife (who also shot The Third Man) under the direction of dollar-from-a-dime maestro Jacques Tourneur (Out of the Past, Cat People, I Walked with a Zombie). I made some apparently oversized gifs from it (too big for tumblr) and I’m parking ’em here. More gifs after the jump…

END_OF_DOCUMENT_TOKEN_TO_BE_REPLACED

Dana Andrews and the films he made have long been favorites of mine so I was delighted when I found out that Steve Reginald (aka @sreggie) of Classic Movie Man was putting together a Dana Andrews Blogathon. The following is my contribution; see the rest of the excellent posts here. 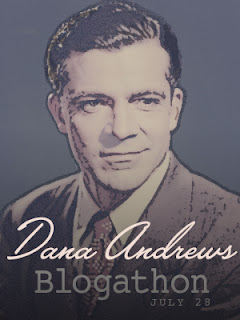 I’ve chosen Boomerang! (1947), directed by Elia Kazan. The film is based on an actual case of an innocent man being convicted of murder in Connecticut in 1928 (though the city was changed from Stamford to Bridgeport). Kazan wanted to meld the documentary style of a newsreel with Hollywood moviemaking techniques, and he succeeded — this film is the direct ancestor of the “fact-based” docudramas with which we’re so familiar today. It was supervised by the same producer as the March of Time newsreels, Louis de Rochemont, much of it was shot on the run in real locations, and there’s no score. Despite this, Kazan later expressed dissatisfaction with the film, and with his star.

The no-nonsense credits — names typewritten on the plain white pages of a script, turned by an unseen hand — reflect the bare-bones staging of the film. The voice-over introduction makes it clear that arresting an the wrong person can happen anywhere: “people are the same everywhere,” it admonishes. Then the fast-paced action kicks off with the murder: The victim, a minister, is shot off-screen. The townspeople react with shock, disbelief and sadness that such a well-known and beloved man could be shot to death just like that; even the local hoodlums throw some money together for a wreath. We see the minister’s life in an economical flashback. He was part of the “reform” government that cleaned up the town, and he knew a lot of peoples’ secrets. The perpetrator could have been anyone. The description of the murderer is appropriately vague: “a man in a dark coat, light hat, medium build.”

Andrews plays State’s Attorney Henry Harvey, who is based on the DA in the real case. He’s first seen around 10 minutes in, when police chief “Robbie” Robinson (Lee J. Cobb) goes to Harvey’s office to give him an update. It’s clear that the case is already a pressure cooker. The local paper, a property of the reform government’s opposition, is taking the opportunity to make the police, and by extension, the incumbents, look incompetent. Editorials in print and on the radio are agitating the citizenry, neighbors are bickering, and even Harvey’s wife Madge (Jane Wyatt) is after him about the case. It’s no surprise that the shadow side of human nature would begin to dominate. When a “tramp” matching the description is found in Ohio, with a gun of the same caliber that killed the minister, and admitting to having left town when the murderer supposedly would have, he’s arrested and brought back to Connecticut. He’s actually a WWII veteran named Waldron (Arthur Kennedy), who is right out of the Army and can’t find a job. The police torture a confession out of him and the case goes to an inquest, which proceeds as you might expect.

Harvey is at first keen to convict Waldron, practically bounding up the stairs to tell the Chief that ballistics says the bullet and the gun match. But before he takes the next step in the process and indicts Waldron, the attorney decides to chat with him in his cell. This scene is when Andrews really begins to shine. He starts out stern, but as he listens to the prisoner’s story — Waldron has had a lot of bad luck after five years in the military — he shows us the faint glimmers of doubt beginning to creep into Harvey’s mind. Something just isn’t right.  It soon becomes even more clear that the “authorities” are concerned with something other than justice — staying in office, getting elected, escaping public ridicule — except Harvey. Because when court is in session, and everyone is expecting an indictment, Harvey declares that Waldron is innocent. The rest of the film is a kind of trial, as Harvey recalls witnesses from the inquest and introduces new evidence to prove his statement true, all the while ending his political career.

Andrews is always underrated, but never more than by the director of Boomerang! Kazan is quoted on the TCM site as saying,

There was very little you could do with Dana….He could learn three pages in five minutes. He had a fantastic memory, even though he’d been up late drinking the night before. He’d come to work, dress up, and we’d roll him out. His style was okay in the movie, because he was playing a lawyer, and essentially there wasn’t supposed to be too much going on inside of him. But unfortunately that kind of acting leaves you with the feeling that there was nothing really personal at stake.

Maybe Kazan felt this way because this was an early work (his third feature), and he was still perfecting his style, but I can’t help but think he’s seeing a different film. Maybe he forgot to watch Andrews in the scene in the courtroom where, in order to recreate the crime, Harvey has one of his assistants shoot him with the loaded murder weapon. Andrews certainly isn’t melodramatic (though at one point, as Harvey deals with a gun-toting, blackmailing political hack, we do see a flash of Lt. McPherson from Laura). His performance is subtle and controlled, as in appropriate for a prosecutor, but it’s a very authentic. His Harvey isn’t perfect, just that rare person who will temper his ambition to see justice served. One of the ways Andrews makes him real is that he behaves differently at home than he does at work. (Most people do, maybe even you.)

This film isn’t on DVD, and Fox pulled most of it down from YouTube (hence the mediocre screenshots), so keep an eye for it on TCM. You don’t want to miss one of Dana Andrews’ best performances.

UPDATE: Boomerang! is actually available from ClassicFlix or via Amazon. You could do a lot worse than buying this film. Thanks Stephen!

Monday, March 26
2:45 p.m. Zero Hour! (1957)
I’ll be tuning into this for two reasons, one being Dana Andrews, and and the other this oddly Airplane!-like synopsis: “When a flight crew falls ill, the only man who can land the plane is afraid of flying.”

Tuesday, March 27
Robert Mitchum Block
Beginning at 8 p.m. with Cape Fear (1962), TCM features 5 films starring one of the toughest dudes around, Robert Mitchum. He is truly psychopathic in Cape Fear and The Night of the Hunter (1955), both of which are difficult for me to watch, but I still recommend them.

Thursday, March 29
3:00 p.m. The King’s Thief (1955)
George Sanders Alert
As he did in Forever Amber, Sanders plays Charles II in a swashbuckler that doesn’t require much thought. I mean that in the best way.

Friday, March 30
8:30 a.m. Random Harvest (1942)
Paula (Greer Garson) is a nice showgirl who takes in a “John Smith” from the local asylum (Ronald Colman) only to lose him when he recovers his memory, discovers that he is really a rich guy and forgets all about her. Such a romantic film. No, really. Trust me. 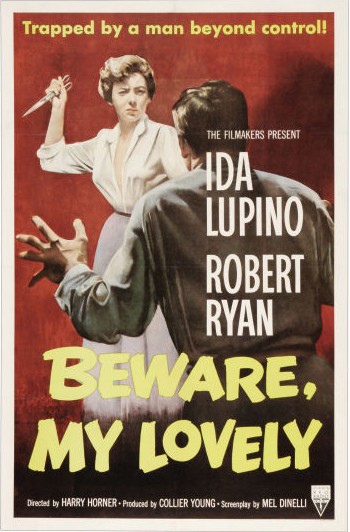 6:30 p.m. Beware, My Lovely (1952)
I bet you thought I was going to pick The Seven Year Itch or Lost Weekend? Both are pretty good, especially Lost Weekend. Instead, I’ve got to shill for Beware, My Lovely, sort of a film noir/thriller hybrid that stars tough cookie Ida Lupino as a widow who discovers her handyman (Robert Ryan) is really a ticking time bomb of homicidal paranoia. Some really interesting angles make it a class on subjective camera.

Saturday, March 31
1:30 p.m. Stagecoach (1939)
Orson Welles allegedly watched this 70 times while making Citizen Kane, you might want to check it out at least once.

8:00 p.m. Sunrise (1927)
***TCM PARTY***
I really want see this one because it was directed by F.W. Murnau of Nosferatu fame. That film is one of the few silents I’ve seen on a big screen (OK, it’s also one of the few silents I’ve seen anywhere) and it really scares me, so I’m interested to see what he does with this story of major drama brought on an innocent married couple through the corrupting influence of a woman from the city. Guest hosted by @tpjost.

Sunday, April 1
So many good films today…wow. One crazy-sounding one is scheduled for 6:00 a.m., Hips, Hips, Hooray (1934), the plot of which is described as “the pretext for some delightfully anarchic gags.” Otherwise, you can tune pretty much any time today and not go too far wrong.

Monday, February 27
As I’ve been saying all month, with the 31 Days of Oscar (ending March 2), it’s really difficult to go wrong. There’s a lot of well-known ones on the schedule for today, so I wanted to spotlight 1947’s Boomerang (3:00 p.m.), a lesser-known film noir considered by its director Elia Kazan to be his “breakthrough film,”  in which he applied newsreel-style documentary techniques to Hollywood storytelling. However, he didn’t really value his star, Dana Andrews, so I’m interested to see how it all worked out. Nominated for Best Screenplay.

Tuesday, February 28
The Man Who Would Be King (1975)
***TCM PARTY***
John Huston directs a story by Rudyard Kipling in which a couple of ne’er-do-well British Army officers (Sean Connery and Michael Caine) are mistaken for gods and live it up…until the day they’re found out. Nominated for Best Art Direction, Costume Design, Film Editing and Best Adapted Screenplay. Check out #TCMParty on Twitter…watch and tweet along!

Wednesday, February 29
6:00 a.m. The Thief of Bagdad (1940)
I was so surprised to read about the tortuous production of this film. If it had a Facebook profile, its relationship status would be “It’s complicated.” And yet it turned out perfectly. Starring Conrad Veidt as the evil Jaffar and Sabu as the titular thief; directed by Ludwig Berger, Michael Powell and Tim Whelan (see what I mean?)

8:00 p.m. The Shanghai Gesture (1941)
“[A] tale of murder and mayhem in a Chinese bordello” directed by Josef von Sternberg of The Blue Angel and Morocco fame. Nominated for Best Art Direction and Musical Score.

Saturday, March 3
8:00 p.m. Some Like It Hot (1959)
***TCM PARTY***
I watch this every time it’s on and I think I recommend it every time. Jack Lemmon and Tony Curtis play musicians on the run from gangsters; the only band they can join is women-only. The grand-daddy of Tootsie, Mrs. Doubtfire, and Bosom Buddies. The 31 Days of Oscar ends on Friday, but I just want to point out that Hot won Best Costume Design and was nominated for Best Director, Actor (Lemmon), Art Direction, Cinematography, and Writing. Check out #TCMParty on Twitter…watch and tweet along! 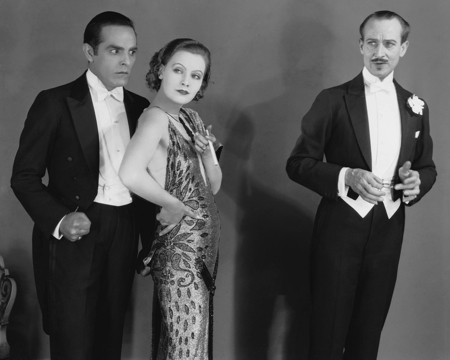