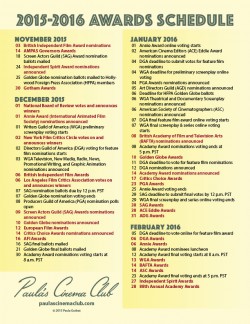 This schedule is not comprehensive…by that I mean, I haven’t included every award, set of awards, or awards show out there. Let’s be real, with the proliferation of recognition, and the many very worthy film festival prizes given out over the course of the past year, that list would run several pages. Only those awards that 1) occur from November on, and 2) have at least arguable significant influence on that Super Bowl of the film industry, the Academy Awards, made the cut. Thus the inclusion of the various guild and craft awards dates, as many of their members are also members of the Academy.

Compiling these dates and analyzing each set of awards’ possible Oscars influence based on info from various publications and guilds’ and societies’ web sites, not to mention adding the links, took a fair amount of time and effort, so feel free to use this schedule or pass it on, just please don’t remove the credit.  Thank you and enjoy!