My Man Godfrey (1936) has always been one of my all-time favorite films. The Godfrey of the title is a derelict (William Powell) who, after meeting wealthy and eccentric Irene Bullock (Carole Lombard), is hired as a butler in the zany Bullock household. It’s a really fun hour and a half, and if you haven’t seen it, I highly recommend that you do.

Godfrey‘s opening credits are very distinctive and very well-integrated with the storyline. The names (and titles, if necessary) of the cast and crew are designed like neon signs on buildings near the riverfront. The camera pans right, showing all the names in turn, ending on a painting of the city dump, where Godfrey, along with other “forgotten men,” makes his home. The painting dissolves into the first shot of the film.

I’ve included the screencaps below in case anyone wants to get a closer look. 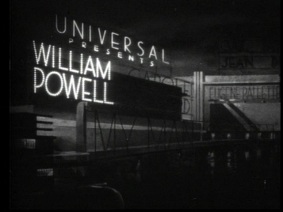 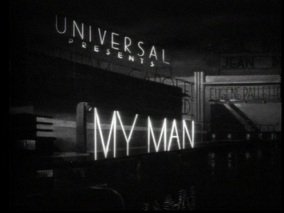 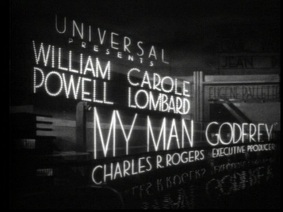 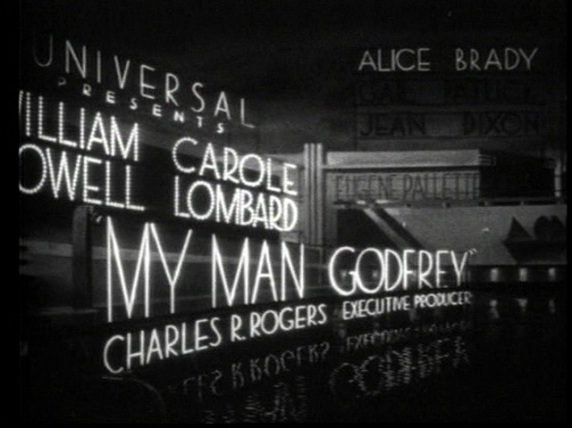 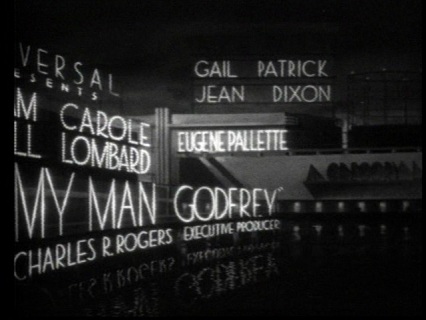 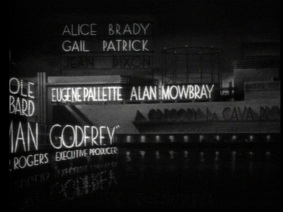 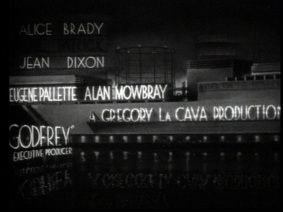 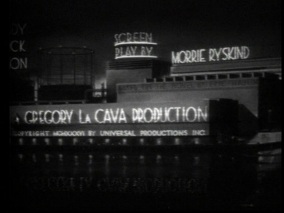 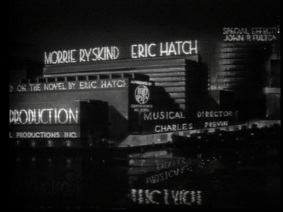 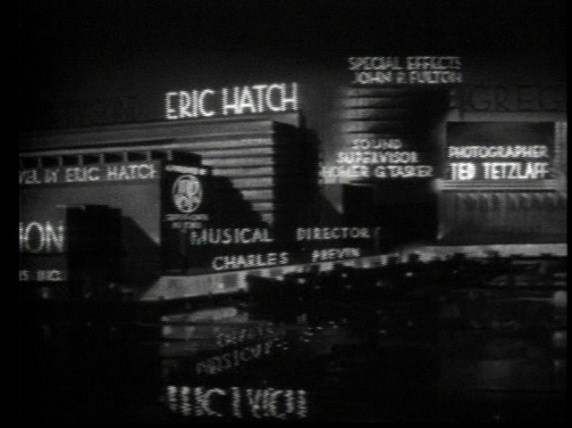 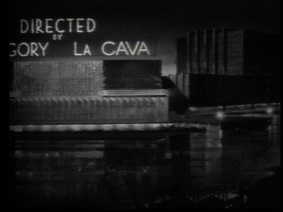 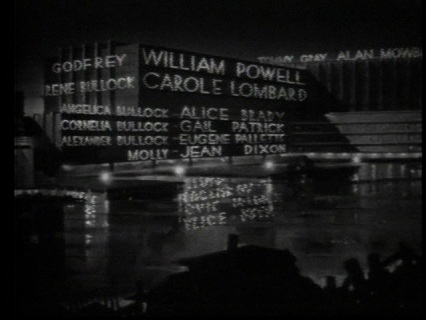 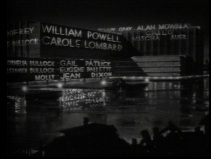 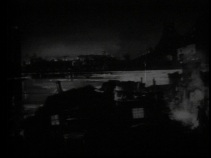 The Godfrey typeface’s geometrical forms and low bars are very typical of the art deco type commonly used in the 1920s and 1930s. After some research, I think the closest you can get today is probably Semplicita Pro by CanadaType. You can “test drive” it here.

During the daytime hours, TCM has 12 hours of Ann Rutherford’s movies scheduled. She very sadly passed away on June 11. Rutherford is probably best known as Carreen O’Hara, Scarlett’s nice sister, in GWTW but I also liked her as Lydia Bennett in Pride and Prejudice (1940), showing today at 10:45 a.m. I’m definitely going to record Two O’Clock Courage (1945), an early Anthony Mann film, starring Rutherford and Tom Conway (brother of today’s birthday boy George Sanders). Rutherford appeared at the TCM Classic Film Festival in 2011 Look for us on Twitter with #TCMParty…watch & tweet along.

midnight Stand-In (1937)
Star of the Month Leslie Howard plays an uptight banker sent to overhaul a Hollywood studio; Joan Blondell is the title character, a sassy former child star, who decides to help him, if he’ll only let her; Humphrey Bogart is the beleaguered producer burdened with a dud film, a histrionic leading lady, and a drinking problem. This has been one of my favorite movies since I saw it last year and my friend Classic Film Freak was kind enough to post my review.

Wednesday, July 4
Patriotic movies are scheduled all day today and two of the most interesting are The Scarlet Coat (1955), about the beginnings of the U.S. Secret Service at 9:15 a.m. and The Devil’s Disciple (1959). You really can’t go wrong with Yankee Doodle Dandy (1942) either.

Thursday, July 5
7:00 a.m. Evelyn Prentice (1934)
This is an interesting pairing of William Powell and Myrna Loy outside of the Thin Man series. He plays a lawyer whose wife (Loy) hasn’t really done anything to deserve being blackmailed. The film was rushed into production after the huge success of The Thin Man to capitalize on their chemistry. It’s so good you sort of won’t believe it when they’re supposed to not be getting along.

5:45 p.m. Penelope (1966)
I haven’t seen this movie. I recorded it last year before we changed cable companies, it was one of the movies that was on the DVR and there was no way to transfer it. But Natalie Wood and Peter Falk are in it, so I’m going to record it again.

8:00 p.m. Ace in the Hole (1951)
***TCM PARTY***
In the first of guest programmer Spike Lee‘s picks for tonight, a reporter who’s been demoted to a small-town newspaper tries to leverage a catastrophe into a return to the big time. Watch and tweet alone with our special guest host @WillMcKinley.

Sunday, July 8
It’s really difficult to go wrong today. My favorite favorites:
2:15 p.m. The Thin Man (1934)
Sometimes well enough really should be left alone. See above. Celebrate that this isn’t going to be remade by watching the original and best.

midnight Bande à part (1964)
Two thugs and a girl attempt to rob her aunt’s house with complications to be expected from a director, Jean-Luc Godard, whose biggest influences are the bright and dark sides of Hollywood — musicals and film noir.

Monday, April 2
6:45 a.m. Born to Dance (1936)
Eleanor Powell and James Stewart in a good old-fashioned (by that I mean, sorta corny) musical full of mistaken identity and misunderstandings.

8:00 p.m. Lover Come Back (1961)
***TCM PARTY***
Tonight’s Doris Day block begins with this ad-biz comedy in which Day and Rock Hudson play account execs for rival agencies. Their work philosophies and client relations skills are drastically, hilariously different (to say the least). Guest hosted by @mercurie80. Find us on Twitter with #TCMParty.

Thursday, April 5
8:00 p.m. Please Don’t Eat the Daisies (1960)
***TCM PARTY***
A drama critic and his wife have a difficult period of adjustment when they decide to move from New York City into the suburbs. Find us on Twitter with #TCMParty.

Friday, April 6
9:45 a.m. Jewel Robbery (1932)
Don’t miss William Powell as a well-mannered jewel thief who’s fallen in love with his mark (Kay Francis). Their chemistry is pretty close to what he had going with Carole Lombard and Myrna Loy. Did I mention it’s a pre-Code?

12:45 p.m. The Man with Two Faces (1934)
This sounds really interesting. Edward G. Robinson plays an actor trying to shield his sister from her murderous husband, who seems to have her under some kind of hypnotic spell.

Saturday, April 7
3:00 p.m. The Great Escape (1963)
***TCM PARTY***
It is well-known to you all that I have a thing for World War II movies; not all of them are good, but this one is. A bunch of Allied soldiers try to dig their way out of a German POW camp — it’s the sworn duty of every British officer to attempt to escape! Based on a true story, it stars Steve McQueen, James Garner, Richard Attenborough, Charles Bronson and James Coburn. Find us on Twitter with #TCMParty.

Sunday, April 8
TCM features mostly Christian-themed films today. One that caught my eye airs at midnight, Leaves from Satan’s Book (1919), a Danish silent film directed by Carl Theodor Dreyer. It depicts various historical events from the point of view of the “disheartened” Satan.