I’m not really one for musicals. I don’t universally enjoy them all. But when I like them, I really like them, and they are among my favorite films of all-time. For instance, 42nd Street, Dames, Swing Time, Singin’ in the Rain, and Romance on the High Seas (1948).

To sum up the plot (bear with me): Married couple Michael and Elvira Kent (Don DeFore and Janis Paige) each constantly suspect the other of infidelity. Michael though is too wrapped up in his work to go on the vacations Elvira plans for their anniversaries, and every year he cancels and they stay home. In the course of booking these trips, she meets Georgia Garrett (Doris Day) at the travel agency. Georgia never goes anywhere either; she’s broke and only goes to the agency to window-shop. When the Kents’ third anniversary rolls around, Elvira has reason to suspect that Michael’s inevitable postponement of this trip, a cruise to Rio, is because of his new blonde secretary.

While she’s still fuming with jealousy, the travel agency mistakenly delivers Georgia’s passport photo to Elvira, and that gives the latter an idea: In these pre-Internet, pre-TSA days, Elvira will send Georgia on the cruise in her place, so that Elvira can stay home and keep an eye on her husband without him knowing she’s still in town. Her insistence on going on the cruise by herself heightens Michael’s suspicion, and he in turn hires private detective Peter Virgil (Jack Carson) to go on the cruise and keep an eye on Elvira. Only with the help of her Uncle Lazlo (S.Z. “Cuddles” Sakall) does Elvira successully sneak Georgia onto the ship. Once the ship sails, many complications ensue.

It’s a plot of Shakespearean complexity — with songs! *

The film’s ostensible leads are Carson, Paige, DeFore, and 23-year-old Day, who is listed fourth in the credits and on the poster, but is in practice, the undisputed star. She appears in almost every scene of her feature film debut, and is as natural as if it was her 100th outing, with truly impeccable timing, both comedic and dramatic.

Still, Warner Brothers didn’t take any chances. Some of their best talent is deployed in what are, due to the exigencies of the Day-driven plot, really all supporting roles. Behind the camera, we have the astonishingly versatile director Michael Curtiz, who also produced through his own company; DP Elwood “Woody” Bredell, best known for the gorgeous black-and-white of The Killers; and Busby Berkeley helming the musical numbers. Julius and Philip Epstein of Casablanca fame wrote the script, with polishing by I.A. L. Diamond, Billy Wilder’s most frequent collaborator. Most of the songs were written and composed by Jule Styne and Sammy Cahn.

Taken all together, like the film’s loveliest song, “It’s Magic.”

With Day in the driver’s seat of this vehicle, I tend to consider the rest of the roles —top-billed actors or not — to be supporting ones. There are worse gigs, and this is a doozy of a cast, running like the proverbial well-oiled machine, and helping to make this film some of the most pleasant escapist hours I’ve ever spent. Here’s a quick rundown:

Don DeFore — Donald John DeFore, born August 25, 1913. Extraordinarily reliable as likable B-picture lead or A-picture sidekick. Studied at the Pasadena Playhouse. The only individual allowed to open a restaurant at Disneyland. Married to the same woman, Marion Holmes DeFore, for nearly 52 years; Judy Garland was her maid of honor. Campaigned for Ronald Reagan at the 1976 Iowa state convention. Enjoyed a 30-year television career.
Work to watch: Too Late for Tears, It Happened on Fifth Avenue, Thirty Seconds Over Tokyo

Jack Carson — John Elmer Carson, born October 27, 1910 in Manitoba. Played jovial guys who are frequently revealed to be duplicitous. Frequent co-star of Dennis Morgan, with whom he appeared in 12 Warner Brothers features as the studio’s equivalent of Bob Hope and Bing Crosby, and Ginger Rogers (7 total, most at RKO). Carson and Day have effortless chemistry right out of the gate in Romance on the High Seas, a circumstance on which Warners capitalized twice more, in the musicals My Dream is Yours and It’s a Great Feeling.
Work to watch: the two musicals with Day, Mildred Pierce, Stand-In, The Hard Way

Janis Paige — Donna Mae Tjaden, born September 16, 1922. Started singing in public at age 5. Appeared in Hollywood Canteen along with Carson and Sakall, and six pictures with Dennis Morgan. Left Hollywood in 1951 for Broadway, and worked into the 21st century in television, including on a show of her own. Appeared on stage as recently as 2010. In October 2017, at age 95, Paige wrote a guest column for The Hollywood Reporter about Alfred Bloomingdale’s attempt to rape her.
Work to watch: Two Guys From Milwaukee (with Carson, Morgan, and Sakall)**; The Time, The Place and The Girl; One Sunday Afternoon

Oscar Levant — Born December 27, 1906. Pianist, composer, author, comedian, and actor, portraying sarcastic, world-weary sidekicks. Wrote the books The Memoirs of an Amnesiac, A smattering of ignorance, and The Unimportance of Being Oscar. Levant was troubled with depression for much of his life, a condition belied by his famous one-liners like, “I knew Doris Day before she was a virgin.” The role of Cosmo Brown in Singin’ in the Rain was originally intended for Levant. He also served as the inspiration for the title character in The World of Henry Orient. Screenwriter Nora Johnson (daughter of Nunnally) had a crush on Levant as a teenager; “Levant” is French for “Orient.”
Work to watch: Humoresque, The Barkleys of Broadway, An American in Paris

S.Z. “Cuddles” Sakall — Regular readers know I’ve written about Cuddles before. In 2016, Janis Paige referred to Cuddles as “just about the most adorable person I’ve ever met….He was a very serious actor, but he looked like a teddy bear and he had those amazing cheeks.”
Work to watch in addition to the ones in my other post: In the Good Old Summertime, My Dream Is Yours, Tea for Two

Fortunio Bonanova (above right)— Josep Lluis Moll born January 13, 1895 in Palma, Spain. Bonanova was the baritone opera singer he often played. He made his first film in Spain in 1922. By the late 1920s, he was running his own repertory company in South America. The Spanish Civil War prompted him to settle in the U.S. permanently. He performed on stage and on film, where he was inevitably cast in “ethnic” roles — excitable and/or pompous Italians, Spaniards or Latin Americans — and made them memorable.
Work to watch: Citizen Kane, Five Graves to Cairo, Double Indemnity, Kiss Me Deadly 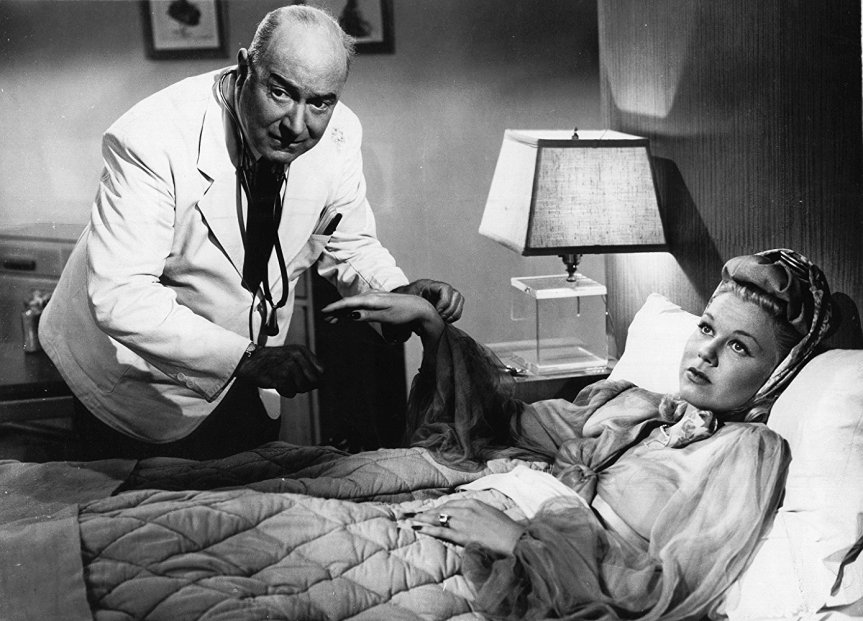 Eric Blore — Born December 23, 1887 in London. The Best Supporting English butler or aristocrat, Blore began his working life as an insurance agent, started acting in Australian touring theater, and made his feature debut with The Great Gatsby in 1920. Played his first headwaiter at age 46 in 1933’s Flying Down to Rio.
Work to watch: The Lady Eve, any of the Fred Astaire/Ginger Rogers movies (Swing Time is on TCM on Thursday 12/21/2017 at 8:00 p.m. Eastern.)

Romance on the High Seas won’t change your life, and it won’t bring about world peace,*** but it will help you forget the chaos of the world for a couple of hours. I hope you will have as much fun with it as I do. 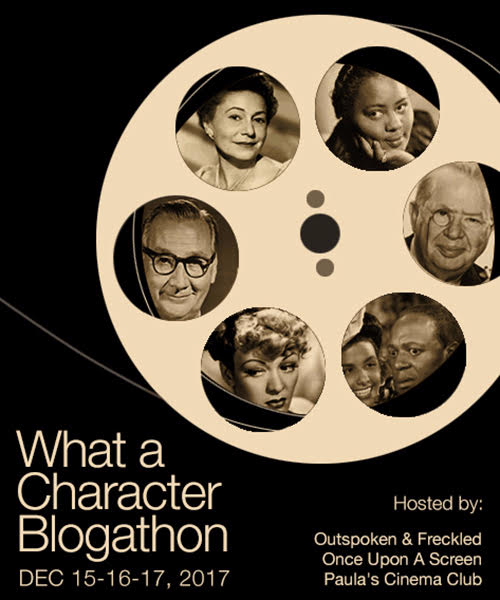 This post is part of the Sixth Annual What A Character! Blogathon, hosted by myself, Aurora of Once Upon A Screen, and Kellee of Outspoken and Freckled. Remember to check out the Day 1 and Day 2 posts as well.

* Actually it’s more like a cross between The Keyhole (1933 Kay Francis-George Brent joint) and a comedic Out of the Past.
** Since all of these actors were under contract with Warners and/or RKO at one time or another, several appeared in several pictures together, so that a Venn diagram of their films in common would look like a kaleidoscope image.
*** Romance on the High Seas does however pass the Bechdel Test.