To paraphrase a common saying, writing about cinematography can be like dancing to architecture. But I’m going to give a shot, because it’s a travesty that Roger Deakins, ASC, BSC, CBE has been nominated for the Best Cinematography Oscar a whopping TWELVE times, and has yet to win.

With his nomination this year for his work on Angelina Jolie’s Unbroken, Deakins is on a three-year streak, having also gotten the nod for Skyfall in 2013 and Prisoners in 2014. He’s been nominated for Academy Awards in two consecutive years THREE times (1997/1998, 2001/2002, 2008/2009), was once nominated twice in the same year (2008), and he’s won numerous other awards, including BAFTAs and ASC and BSC awards.

Deakins is known for his simple, naturalistic set-ups and his devotion to story over all other considerations. He likes silhouettes, fire at night, and high angles, but his shots almost never draw attention to themselves, which may be part of the reason it’s never been his year with the Academy.

He is most often associated with the Coen brothers, with whom he has worked on eleven pictures (not all Oscar-nominated). Their work has benefited greatly from his fluency with different lighting styles.

I was overwhelmed by the thought of analyzing the circumstances that have kept Deakins from the podium in the past, so I’ve chosen to spotlight briefly just a few of his amazing Oscar-nominated works. You know them, even if you’ve never heard his name. For instance…

Nomination #1: The Shawshank Redemption (1994)
Most people have seen this one, and most people love it. The exteriors of Frank Darabont’s prison drama were shot at a real reformatory, but the cell block was a set built in a warehouse. Both were appropriately drab and dark, but difficult to light. Deakins told the BBC last year, “We actually shot most of the film in a prison that was absolutely black — I used a huge amount of light to create the look, more or less every shot, even some of the exteriors were lit.”
Here’s Deakins discussing one of his favorite Shawshank scenes on NPR in 2009:

Deakins recalled in a recent interview that one of the greatest compliments he’d ever gotten was a statement he overheard after he was nominated for the Oscar, during his first visit ever to the American Society of Cinematographers (ASC) Clubhouse:

I heard in a conversation — I mean nobody knew me. Why would they? There was a conversation going on with a couple of very well-known cinematographers, and one was saying to the other, “Yeah, Shawshank, it’s wonderful photography. But I wouldn’t vote for it because it’s all natural light. I would vote something that’s been lit.” And I thought, “Natural light?? Jesus!” I just laughed. As I say, it’s probably the biggest compliment anybody’s ever paid me.

As the interviewer notes, some of the ASC had to have voted for him; he got his first of three ASC Outstanding Achievement awards that year. He received the group’s Lifetime Achievement Award in 2011. 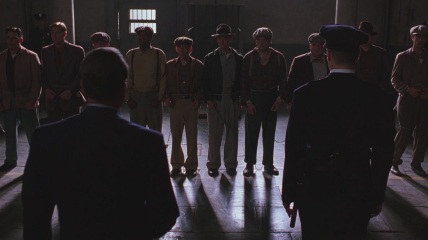 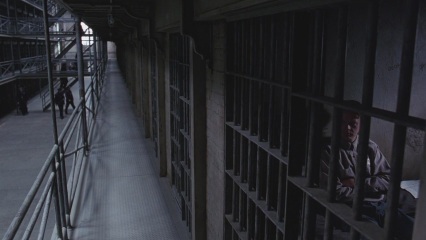 Nomination #4: O Brother, Where Art Thou? (2000)
Bear with me here…The Coen brothers paid tribute to Preston Sturges by making a film of the same name as a novel referred to in Sturges’ Sullivan’s Travels (1942). In that film, director John Sullivan (Joel McCrea) is fed up with the sophmoric but successful comedies he usually makes, and sets out to adapt the socially-conscious (but entirely fictional) novel “Oh Brother, Where Art Thou?” (by an author named “Sinclair Becksmith”) into a film. Times are bad, so he travels the country as a tramp, hoping to learn about the suffering of ordinary Americans, but by the end, decides to make the film as a comedy instead of the earnest drama he originally intended. The Coens’ movie is their idea of what Sullivan would have gone on to make after Sturges’ picture ends. Whew.

Deakins suggested both the aspect ratio and the use of spherical lenses to emphasize the epic nature of the story and create depth. O Brother was the first Coens’ film to be shot in 2.4:1, and their first where the entire film was scanned and then color-corrected with the digital intermediate process. Deakins says they wanted a Dust Bowl look despite shooting in Mississippi in the summer, where all the topography they needed was present, but the landscape was lush and green. They couldn’t really get that look during production using filters, or in post-production with traditional photochemical processes. Deakins recalled the techniques used for Pleasantville (1998) by another DP, so he contacted the same effects house and worked with them to give O Brother the perfect Depression-era drought setting. There’s a whole video about it here.


I’ve included the trailer for this neo-noir from the Coens because it’s a relatively unknown “masterwork of light and shadow” [indiewire]. Set in late 1940s Santa Rosa (like Hitchcock’s Shadow of a Doubt), Man is about Ed Crane (Billy Bob Thornton), a laconic, chain-smoking barber who blackmails his wife’s boss/lover (James Gandolfini) for money to invest in a dry cleaning business. Like every other sucker in every other film noir ever, Ed soon finds his plans going haywire.

While Deakins’ work here is indescribably beautiful, it doesn’t strictly adhere to the sharp black-and-white of classical noir, though the black is just as deep and the white is just as stark. HIs trademark naturalism results in more mid-tones, echoing the gray area the protagonist inhabits. Just go find it and watch it if you haven’t already. Yes, that is Scarlett Johansson. 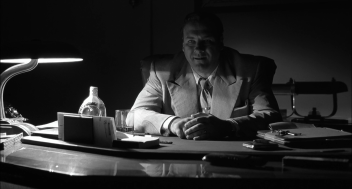 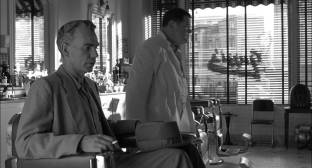 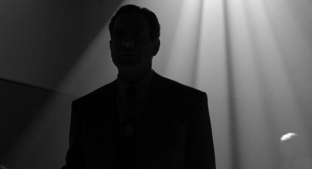 Once you watch the picture, you may want to check out this rather lengthy but fascinating interview with Deakins:

Fun fact: Apropos of this barber-centric picture, Deakins cuts his own hair. His barber died when he was 11 years old, and he didn’t want to go to anyone else. He also wears the same clothes most days — white or black shirt, jeans and cowboy boots — to keep things simple.

Nominations #6 and #7: No Country For Old Men (2007) and The Assassination of Jesse James by the Coward Robert Ford (2007)
I won’t lie, I haven’t seen either of these all the way through (I know, I know), but obviously being nominated in any Oscar category twice in the same year is not ideal, as there’s a good chance of splitting the vote.

Other nominees: The Diving Bell and the Butterfly, Janusz Kaminski | Atonement, Seamus McGarvey
Winner: There Will Be Blood, Robert Elswit

Nomination #10: Skyfall (2012)
The Daniel Craig-era Bond films have arguably been the most visually stunning of the entire series and Skyfall may well be the best-looking one. Deakins had previously worked with director Sam Mendes on Jarhead (2005) and Revolutionary Road (2008).

I don’t watch much TV, but I have seen a couple episodes of “Sherlock,” and I get the feeling that crew digs Skyfall too. To my great disappointment, Deakins turned down both Spectre and Bond 25, telling the BBC: “I was really torn. I would have loved to work with Sam [Mendes] again but I just didn’t feel I could bring anything really new to it. I’d really like to see someone else have the opportunity.” Well that makes one of us…

It’s tempting to go through every single one of Deakins’ well-known works in depth, but I’ve concentrated on a just a few of his Oscar-nominated films. If I’ve missed your favorite, tell us about it in the comments. We’ll know whether or not he will finally get his due at this year’s ceremony on Feb. 22…here’s hoping the third nom in a row…or the 20th anniversary of his first nominated film…is a charm. 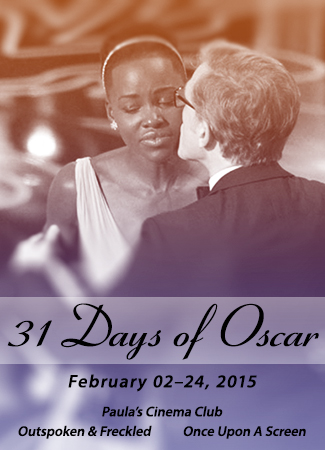 This post is part of the second annual 31 Days of Oscar Blogathon hosted by Paula’s Cinema Club, Outspoken and Freckled, and Once Upon a Screen. For more posts featuring Oscar crafts, visit the Week 3 post at Outspoken and Freckled, and stay tuned for Week 4, Pictures and Directors. Our blogathon gets its inspiration from Turner Classic Movies’ 31 Days of Oscar, the channel’s month-long Academy Awards celebration, “where every movie shown is an Oscar winner or nominee.”