We have now arrived at week 3 of the 31 Days of Oscar blogathon, which coincides with Turner Classic Movies’ month-long celebration of the very best in cinema. Co-hosted by me (@Paula_Guthat), Aurora (@CitizenScreen) of Once Upon A Screen, and Kellee (@IrishJayhawk66) of Outspoken & Freckled, the third installment of our Second Annual Oscar extravaganza addresses Acting, arguably the most remembered aspect of any film, particularly Academy Award contenders. 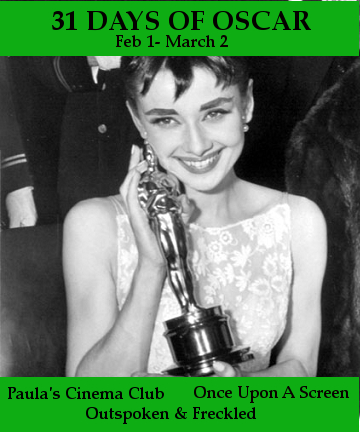 For various reasons, including a successful run of Blue Jasmine at Cinema Detroit, I’ve been thinking more about the Best Actress category this year than any other. Oscar front-runner Cate Blanchett is simply genius in the title role. Many people have mentioned to us that her acting (and to a lesser extent, that of the rest of the cast) are the reason they like or even love this unexpectedly downbeat movie. (Sally Hawkins is, of course, excellent. But Andrew Dice Clay? Really? Really. He’s actually good in it.) And I have agree, and also add that I think this is because Blanchett makes Jasmine seem like a real — albeit self-absorbed and delusional — person. I’m pretty sure Blanchett will win, she just earned a BAFTA, but the other contenders are Amy Adams, Sandra Bullock, Judi Dench and Meryl Streep, so I guess it’s not a done deal. Be that as it may, I believe that Blanchett, assisted by the rest of Jasmine‘s acting troupe, is what kept people coming into the theater seven months after the film’s premiere.

And now, without further ado, here are this week’s posts:

Pam at Once Upon A Screen — The Golden Age of Hollywood Revisited: Henry Fonda Finally Wins An Oscar

The Gal Herself — In Praise of Practical Magic: Julie Andrews

Karen of Shadows and Satin — Van Heflin in Johnny Eager (1941)

ImagineMDD — Hume Cronyn: One Life, a Boatload of Characters

Aurora of Once Upon A Screen — Spencer Tracy: Oscar and the Actor’s Actor

More of the Second Annual 31 Days of Oscar Blogathon: