Greetings, all and sundry!

It’s my great pleasure to accept Paula’s gracious invitation to add a different perspective to the current Oscar Blog~A~Thon and its many unique facets.

Opting for the less-discussed, though aesthetically important variant that today has been given criminally short shrift amongst the plethora of romantic comedies. Where a logo T-shirt, jeans, sandals or sneakers will suffice for the guy, while skinny jeans, a midriff top and heels works for the girl.

For this dissertation, I want to go back to the familiar stomping grounds of the 1970s and a little-known novel replete in the history of its time. The Luck of Barry Lyndon by William Makepeace Thackeray was adapted by that master of detailed storytelling, Stanley Kubrick, who devoted 300 days in 1973 and ’74 to splendid on-location cinematography around the estates, castles, valleys and marshes of Ireland, creating a lavish, occasionally luscious feast for the eyes.

A film about unadulterated social climbing within the strict confines of 18th-century English morals, mores and etiquette, where words, or lack of them, contain great destructive or constructive power. Enhanced and highlighted by meticulously detailed and constructed costumes.

To that end, allow me to introduce a perfect cure for a bout of the flu, or dreary rainy or snowy days, when the weather outside is far more miserable than you wish it to be, and you are in need of an opulent distraction: Barry Lyndon (1975).

Barry Lyndon begins with ne’er do well, Redmond Barry (quietly adequate Ryan O’Neal) trying to improve his lot in life after the death of his father in a duel, leaving Barry and his mother to scheme amongst monied families. Falling in love, being rejected and getting revenge, before running off to Ireland.


Joining the British Army to survive the French at the Battle of Minden. Before deserting and trying his luck at the gaming tables. In search of a sponsor or a titled friend.

Barry’s a very busy boy and finds himself in the employ of a minor spymaster and gambler (Hardy Kruger). Forming an alliance at the gaming tables and shady dealing with new, well-off friends and acquaintances. Working their way across Europe to placate Barry’s desire to make money the old fashioned way. Marrying it! 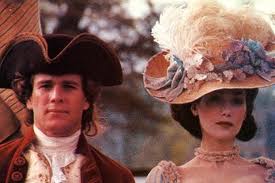 The apple of Barry’s eye is the beautiful, willowy, wealthy and widowed, Countess of Lyndon. Outwardly delicate and sedately seductive Marisa Berensen, whose gaze, occasional glare and silence carries more weight than pages of written dialogue!

She is seemingly wedded to intricate gowns constructed of rigid whispering taffeta and flattering loose silk, and even more elegant hats. Gliding about parquet floor sally ports or the polished woods of grand halls, posture perfect and temperament mild as she and Barry are wed. With her young son, Lord Bullington (Dominic Savage as an infant and child; Leon Vitale, later in life), who sees Barry for what he is and despises him. Even more so as a baby stepbrother, Bryan Patrick is added to the equation, upon whom Barry ridiculously and lavishly dotes.

I won’t go into heavy detail, but Barry does what he does. Going through paramours and the Countess’ wealth with carefree and sloppy abandon, as Lord Bullington’s anger grows. Intrigues about inheritances arise, and Barry’s mother (Marie Kean) tries to take over, bringing about a duel and ending that may seem sad but is ironically well deserved.

With a slow-moving, yet intricate morality play of this size, acting, is of course essential to sell the story. Yet it is costuming that seems to rise above and take center stage in cementing time and place. In a film that is essentially an opulent, lush and moody oil painting brought to life.

We’ve all heard of Mr. Kubrick’s insistence in designing camera lenses for shooting in available candle- and sun- light. Also the exactly of its time Schubert-heavy piece that comprises its soundtrack. The costumers are the unsung heroines and heroes are never seen in front of the camera, but their meticulous hard work and attention to design and detail adorns the film and make things whole.

Huge kudos to 1976 Best Costume Design Oscar winners Milena Cannonero and Ulla-Britt Sonderlund, aided by Gary and Yvonne Dahms,* Gloria Barnes, and Jack Edwards, for their vision in regaling Ms. Berensen in soft tones and period pastels, while making British Redcoats even bolder and empowered on the field of battle. And to Colin and Frances Wilson, for creating minor miracles with elegant headwear.

Note: This film is available for viewing on YouTube. Edit: As of July 4, 2022, this film is on YouTube, Vudu, Google Play, and Apple TV.