Marnie sees red and panics. As she struggles to remember the events of a long-repressed night from her childhood, we see Marnie as a child awakened from a deep sleep and sent to the sofa while her mother uses the bed for ‘business.’ A storm rages outside and thunder frightens the sleeping child. Mom’s client, a sailor, tries to comfort Marnie but the child resists him. She wants her mommy who enters and pushes the man away from her girl. A fight breaks out and Mom falls, hurting herself.  In an attempt to help her mother, Marnie grabs a poker from the fireplace and beats Bruce Dern to death. Marnie (1964) 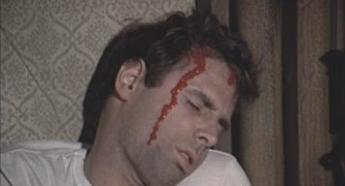 Dressed in a tuxedo for a society party, Bruce Dern waits in a solarium for a tryst with his beloved, Bette Davis. The meeting doesn’t go as planned. Seconds later we see his face full of fear as an axe wielded by a mysterious stranger descends and his head rolls across the floor.  Hush…Hush, Sweet Charlotte (1964)

Dying violently after very brief screen time may seem like an inauspicious start to a film career, but it added to the CV of a prolific actor who has played killers, scumbags, and downright nasty guys. Bruce Dern started in television in the 1950s and continues to work today.  To be fair, he has also played some non-psychopathic roles though Dern, as a rule, is known for playing heavies. Tall and lanky, with a toothy grin that can go from friendly to malevolent in an instant, Dern plays nasty like no one else. In the western Hang ‘Em High (1968), his murderer/cattle rustler taunts Clint Eastwood and jumps him when he’s not looking.

In Roger Corman’s The Wild Angels (1966), he and fellow Hell’s Angel Peter Fonda, clad in swastikas and other Nazi insignia, threaten veteran Dick Miller with a pair of pliers. In his most infamous role, Long Hair in The Cowboys, Bruce Dern shoots John Wayne in the back, killing him.  When they discussed that scene John Wayne told Dern, “America will hate you for this.” Dern replied, “Yeah, but they’ll love me in Berkeley.”

His counter-culture reputation was cemented after a series of films he did with Roger Corman and others during the 1960s. He even strayed from his nasty persona in a few. In The Trip (1967), Dern plays a benevolent soul guiding Peter Fonda through his first acid trip.  His calm, thoughtful demeanor and compassionate tone are a far cry from the snarling villain he usually played. I watched The Trip recently and listened to director Roger Corman’s audio commentary on the film. He said of all the cast members, including Peter Fonda and Dennis Hopper, Bruce Dern was the only one who never touched drugs.  A marathon runner who almost qualified for the Olympics, Dern lived a healthy life. During one scene in which partiers pass a joint, Dern is the only one not smoking. 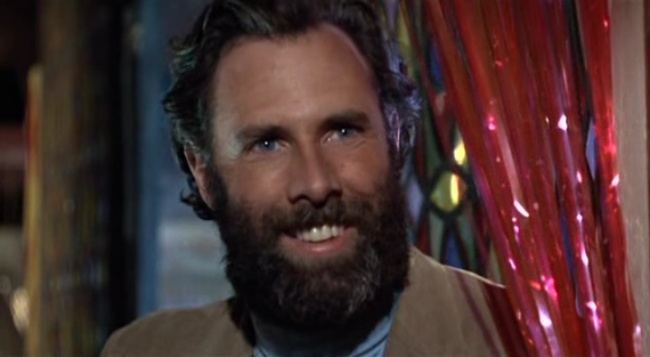 Jack Nicholson, a close friend, said Dern was one of the best of a breed of actors coming into his own in the 1970s. Films like The King of Marvin Gardens (1972), Silent Running (1972), The Great Gatsby (1974), and The Driver (1978) allowed Dern to show his range.  In Marvin Gardens as the ne’er-do-well with a dozen get-rich-quick schemes, Dern is all charisma and charm, and you get caught up in his enthusiasm even when you sense his plans will never come to fruition.  In Silent Running, as astronaut Freeman Lowell, Dern gives a nuanced performance. You know his actions are wrong, but his motives and the way he relates to little Huey, Dewey, and Louie charm you into rooting for him. As Tom Buchanan in The Great Gatsby, Dern’s callous aristocrat uses people and tosses them aside without a thought. I cannot think of the book or film without picturing Bruce Dern in that role. The spare The Driver lets Dern show his malevolent side again when, as The Detective, he orchestrates a robbery to frame Ryan O’Neal’s getaway driver and seems unaffected by the violence left in its wake. 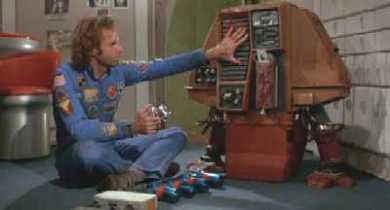 It might surprise you to learn that Bruce Dern’s background is closer to the patrician Tom Buchanan (The Great Gatsby 1974) than the scuzzy gang member Loser (The Wild Angels 1966). Bruce MacLeish Dern, born in Winnetka, Illinois, in 1936, went to the prestigious New Trier High School in Illinois before attending the University of Pennsylvania. He left Penn after a couple years for The Actors’ Studio and a career in acting. Dern’s grandfather served as Governor of Utah and Roosevelt’s Secretary of War. His other grandfather established the department store Carson, Pirie Scott & Co., and the poet Archibald MacLeish is a maternal relation. His godparents were Adlai Stevenson and Eleanor Roosevelt.

Throughout his career, Dern has done scores of television shows including Route 66, Thriller, The Outer Limits, The Kraft Suspense Theatre, Branded, Bonanza, Big Valley, Rawhide, The Alfred Hitchcock Hour, The Fugitive, The FBI, and recent appearances on Big Love and CSI:NY. He even hosted his own series from 1996-2001 called The Lost Drive-In, during which he sat in a vintage car and talked about drive-in movies, old cars, and that era in general, then showed a film which might have played in one. It was a fun show and Dern came off as well-versed and natural. I was sorry to see it end.

With a career spanning almost 60 years, 145 films, and countless televsion appearances, Bruce Dern remains a working actor.  He, his daughter Laura Dern, and ex-wife Diane Ladd received their stars on the Hollywood Walk of Fame in 2010 and IMDB lists 5 or 6 projects in production for this versatile actor.  In May of 2013, Bruce Dern won the Best Actor award at the Cannes Film Festival for his role in Nebraska, which plays in theatres in November of 2013.  I can’t wait to see it!

Kerry Fristoe is on Twitter and writes reviews about an array of eclectic movies at screamingargonauts.com. She lives in Massachusetts with her pretty cool teenager and sweet puppy.

33 thoughts on “What A Character! Bruce Dern: The Guy You Love To Hate”