I don’t have a clever title, just a bunch of facts about one of my favorite actors, Errol Flynn, who was born on this day in 1909. The Adventures of Robin Hood was one of the first classic films I ever saw on a big screen, and the impression he made on my 11-year-old mind is basically indelible. 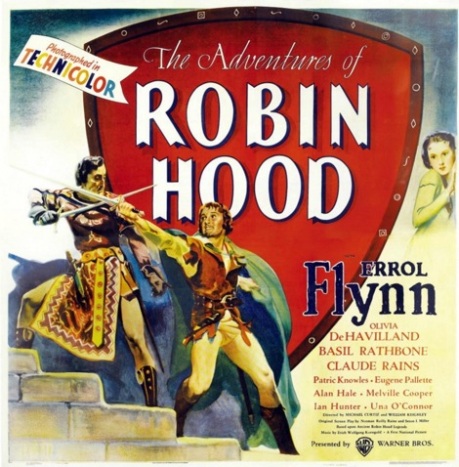 Ida Lupino and Flynn co-starred in Escape Me Never, which flopped; their friendship was a success. She is quoted as saying, “I loved Errol Flynn, who was one of my dear, dear, dear friends…He was just marvelous. Fun and well, a very kind person, very sensitive.” She  addressed him as “The Baron,” while he called her “Little Scout.”*

Two decent movies in which Flynn plays against type as uptight stuffed shirts are That Forsyte Woman (1949) with Greer Garson, and Cry Wolf with Barbara Stanwyck, which I like because it’s really Gothic and odd.

“Women won’t let me stay single, and I won’t let myself stay married.” Flynn was married three times. His first wife, Lili Damita, had been married to Michael Curtiz, whom Flynn disliked (per IMDB). He met his second wife at the courthouse where she worked in the snack bar…he was on trial. And according to his third wife Patrice Wymore, Flynn called her parents “to formally ask for my hand in marriage.” (Check out her gallery.)

Per IMDB, his autobiography, “My Wicked Wicked Ways,” was originally going to be called “In Like Me.” His daughter Rory’s web site is InLikeFlynn.com.

Flynn had a weak heart and had survived tuberculosis and malaria. He was classified 4-F and, despite repeated attempts to enlist in the military, couldn’t serve in World War II. Per IMDB, this was his only regret in life. He had his first heart attack in 1942.

He co-starred in eight films with Olivia de Havilland, but apparently they never hooked up in real life, which is a shame. They seem to have gotten along very well. She talks about him starting around the 3:10 mark of this clip:

I don’t think it’s any coincidence that de Havilland is in all three of my favorite Errol Flynn movies — Robin Hood, Captain Blood and Dodge City.

* Edited per comment below. The source for the nickname info is Ida Lupino: A Biography by William Donati.