If anyone out there has attended a TCM Party hosted by me, you know I always natter on about great Old Hollywood cinematographers, the crisp blacks and whites and beautiful contrast they produced, etc. etc. There are a few names that come up repeatedly, more often than most. Gregg Toland — Citizen Kane, Ball of Fire, The Little Foxes, The Best Years of Our Lives — is an obvious possibility, as is Jack Cardiff — A Matter of Life and Death, Black Narcissus, The Red Shoes. But with this post I’m beginning a series about five less well-known DPs who are equally deserving of some attention.

I’m going to start with John F. Seitz, ASC. Seitz is probably best known for the films noir he worked on with Billy Wilder, Sunset Blvd. and Double Indemnity, which I was admiring last Sunday as I watched it for the bazillionth time. All of Seitz’ trademarks — inky blacks and brilliant whites, “differential illumination of different regions of the screen,” “Rembrandt north light,” and low key lighting — are present in Indemnity, creating some of the most influential noir images ever made. Double Indemnity screen caps are from the fabulous Bluscreens blog.

I find these two parallel scenes particularly striking examples of how Wilder and Seitz worked together so well…in both Walter Neff (Fred MacMurray) walks into the room and sits down in front of Phyllis Dietrichson (Barbara Stanwyck), but the angle is slightly different, and the lighting serves as a barometer for their relationship.

Gifs by A Modern Musketeer.

Some of Seitz’ work on Sunset Blvd.: 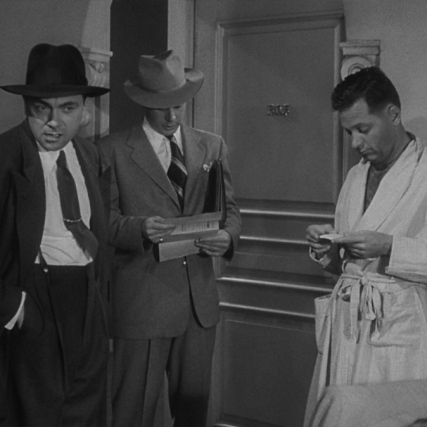 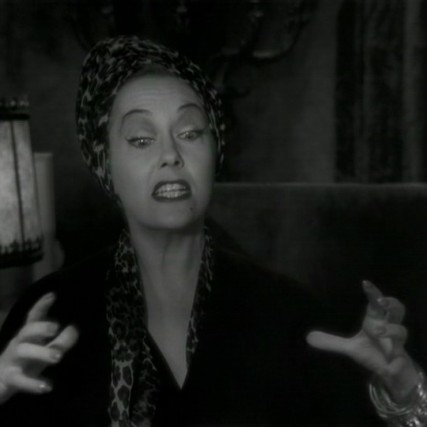 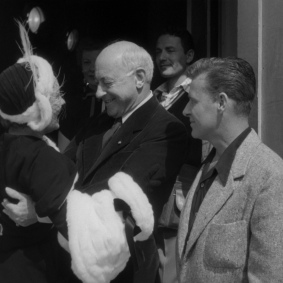 Indemnity and Sunset are just two of Seitz’ 163 films, made over more than 4 decades. Born in 1892, Seitz began as a lab tech in Chicago in 1909 and was working in movies as a director of photography by 1913, continuing through his last film, Guns of the Timberland (1960). He held 18 patents for photographic devices and processes — including dissolve techniques and the matte shot, which he fine-tuned while working on Rex Ingram’s Trifling Women (1922). The collaboration with Ingram was key to Seitz’ career:

Ingram was a great pictorialist; everything in his pictures was subordinate to the image. Collaborating with a cameraman of genius, John Seitz, he created some of the most beautiful films of the entire silent era.
— Kevin Brownlow and John Kobal, Hollywood: The Pioneers

Seitz’ other works include some of my favorite movies: Sullivan’s Travels and This Gun For Hire, both with Veronica Lake; Five Graves To Cairo and The Lost Weekend, also directed by Wilder; and The Big Clock, which like Weekend, starred Ray Milland.  These are just a fraction of his output. How does one person create all those stunning images? Perhaps it was his willingness to experiment:

Where [others] might be inclined to play it safe by using tried and true techniques, Seitz doesn’t hesitate to stick his neck out to try for the unusual and original effect — and he invariably comes up with an exciting result. Far from being a trickster out to create an effect for its own sake, [he] remains an alert experimentalist, constantly searching for new approaches and original camera techniques to make the motion picture a more dramatic medium. There are no clichés in his style – as modern as tomorrow, rugged, forceful and, above all, alive. He insists that cinematography must exist to tell the screen story, rather than stand out as a separate artistic entity.
— Herb Lightman, “Old Master, New Tricks,” American Cinematographer, September 1950

I can’t pretend that this post is in any way a definitive or comprehensive analysis of Seitz’ work, but I hope that it will compel a few to see some of it for themselves. TCM is offering two opportunities on Monday, April 15. One of the silent films he worked on, Mare Nostrum, directed by Ingram, is on at midnight Eastern time. According to TCM’s site, “British director Michael Powell, who worked on Mare Nostrum as a grip, would cite Ingram as one of the influences on his own visionary epics, including Black Narcissus (1947) and The Red Shoes (1948).” Also, one of the pre-codes Seitz shot, Ladies They Talk About (1933), also starring Stanwyck, is scheduled for 6:00 a.m. Eastern.

And now, a very belated THANK YOU: Sincere and heartfelt gratitude to whoever was so kind as to nominate me for not one but two 2013 LAMMY Awards, Best Classic Film Blog, and Best Blogathon/Meme for 31 Days of Oscar, credit for which I share with Kellee of Outspoken and Freckled and Aurora of Once Upon A Screen. There isn’t much chance of my getting through to the next round, but this is one case where I can honestly say the nomination is the award. Tune in to the LAMBcast on Monday at 9:00 a.m., featuring Aurora, to hear the final nominees.

With the 2012 Oscars less than a week away, Ruth at Flix Chatter came up with an amazing idea: A bunch of bloggers each pick a past year’s Best Picture winner  and defend (or not) its merits and win-worthiness. I chose the year 1961. There’s no question that the Best Picture Oscar race that year was an interesting one. All the films in the contest had mighty talent behind and in front of the camera; some had sweeping scope, literary sources, and/or exotic locations. The eventual winner, The Apartment, relied on a deceptively simple concept and a very focused, contemporary setting to work its magic. The apartment of the title is that owned by C.C. “Bud” Baxter (Jack Lemmon), one of thousands of workers at the bottom of the pecking order at a giant insurance company in New York City. So many people work in the company’s offices that the start and stop times of the business day are staggered, so that there isn’t too massive of a crowd trying to catch the elevators at the same time.

At some point before the movie begins, Bud had lent the key to his conveniently located residence to one of the office higher-ups. Soon the key was in high demand by married execs who needed a place to entertain their mistresses. Bud doesn’t want to rock the boat, and he does want to get ahead, so he’s agreed to every request. Not that it’s easy on him. Bud has to find something else to do between the end of the business day and 8 p.m., when his “tenants” are supposed to be out. They eat all his food, drink all his booze, and leave their dirty dishes around. It seems he’s got it made, though, when he gets promoted after the execs give him rave reviews. Called upstairs to see the sleazy vice president of personnel, Jeff Sheldrake (Fred MacMurray), Bud receives a promotion, complete with an office that has a window. There is only one condition…Bud must now loan his key exclusively to Sheldrake, which Bud agrees to do. Soon after, Bud discovers that the lovely company elevator operator Fran Kubelik (Shirley MacLaine) is Sheldrake’s mistress. Although Bud hasn’t quite figured it out yet, he is in love with Fran. When circumstances throw them together, his life really gets complicated.

Billy Wilder directed and co-wrote the film and much of the time it has the trademark seriocomic vibe of another Best Picture nominee he wrote and directed, Sunset Blvd. (1950). The Apartment is both a satire of American corporate society, which seems not to have changed much since the late ’50s/early ’60s, and a charming, bittersweet romantic comedy. Wilder uses stunning wide shots of hundreds of desks or a seemingly endless park bench to emphasize the anonymity and facelessness of modern life, while using tight shots to signal the growing intimacy between Bud and Fran. His script laid the groundwork for really memorable, three-dimensional characters. The acting is uniformly great; Lemmon and MacLaine, who have some of the best chemistry ever, are perfect as two neurotics who take a while to realize they’re meant for each other. Fred MacMurray is astonishingly effective as one of the worst cads in a movie ever.

The Academy recognized The Apartment with 10 Oscar nominations, of which it won Best Picture, Director, Screenplay (Written for the Screen), Art Direction, and Editing. Lemmon and MacLaine were both nominated as well, but competition was tough that year. Burt Lancaster, Trevor Howard, Laurence Olivier, and Spencer Tracy received nods for Best Actor, while MacLaine contended with Elizabeth Taylor, Greer Garson, Deborah Kerr, and Melina Mercouri. (Lancaster and Taylor were the winners. MacMurray wasn’t nominated at all, which I find inexplicable.)

In the Best Picture category, The Apartment faced formidable competition from four other excellent films, all of which were set in the past: The Alamo in 1836 Texas, Elmer Gantry in small-town America in 1927, Sons and Lovers in London and Welsh coal mines in the early 20th century, and The Sundowners in 1920s Australia. And I would argue that, The Apartment, set in contemporary New York City, deserved to win, because it has retained its relevance and has the most to say about modern American life.

The questions dealt with in The Apartment — What are you willing to give up to get ahead? Which is more important, love or money? — resonate in everyday life possibly even more today. It’s easy to see oneself in Bud, Fran or possibly even Sheldrake (though I hope not the latter). Even more people are working in offices than in 1960 and can readily relate to its situations and dilemmas. If anything, corporations are even larger and more faceless, and even more depends on a person’s ability to survive workplace politics, doublespeak and backstabbing. If, God forbid, anyone wanted to do a remake set in the 21st century, a different location, a few mobile phones, and some laptops would be all that is necessary to update it.* Yes, elevator operators and giant metal adding machines are a rare sight in 2012. But greed, manipulation, deception, and infidelity, as well as love, friendship, and generosity are all still alive and well. And the small scale and everyday setting of The Apartment makes its comedy and wisdom universal. Oscar-wise, The Apartment was a great choice.

*The location change is absolutely necessary because I don’t believe there is any way an entry-level employee could afford a place in the west Sixties, just half a block from Central Park, but I am told that wild Christmas parties still occur, though I’ve never been to one.