In which I explain how the Spanish-language version of Dracula led to American Pie. This post is part of the Universal Backlot Blogathon, hosted by Kristen at Journeys in Classic Film. 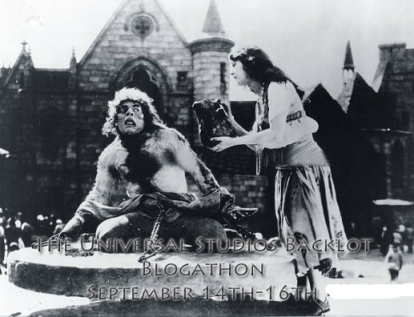 It seems to me that most film fans are familiar with Universal’s 1931 version of Dracula. Starring Bela Lugosi in the role that made him a star, it’s still a popular choice at Halloween, and it’s still capable of creeping you out. However, many are unaware of, and fewer still have seen, Universal’s Drácula, a Spanish-language version, also from 1931. Instead of Lugosi in the title role and Helen Chandler as Mina, en el versión español there are Carlos Villarias and 21-year-old Lupita Tovar as Eva (like Mina, but, as we’ll see, different). While Tod Browning shot the English version during the day, George Melford helmed the Spanish version by night on the same sets. The two productions also shared some of the same crew, who were able to learn from any mishaps or discoveries that occurred during the day. Browning’s version began filming on September 29, 1931; Melford’s on October 23.

The Depression had taken a slice of Universal’s profit pie, and, with the advent of sound, producing films for the once-lucrative foreign markets had gotten more expensive. A silent film could play anywhere in the world with an update to the titles, but effective dubbing was in the future. From The Vampire Book:

Universal’s Czechoslovakian-born executive Paul Kohner suggested a solution to the studio’s head, Carl Laemmle, Jr.: shoot foreign language versions of motion pictures simultaneously with the English versions, thus cutting costs by using the sets more than once. Kohner also argued that salaries for foreign actors and actresses were far less than those of Americans. Laemmle appointed Kohner head of foreign productions. The first result was a Spanish version of The Cat Creeps, a talkie remake of The Cat and the Canary, which Universal had originally done as a silent film. Released in 1930 as La Voluntad del Muerto, it was an overwhelming success in Mexico and made actress Lupita Tovar a star.
Kohner decided to make a Spanish version of Dracula and moved quickly to secure the youthful Tovar for the lead before she could return to Mexico. He chose Carlos Villarias (or Villar) for the role of Dracula, and secured a capable supporting cast with Barry Norton (“Juan” or Jonathan Harker) , Eduardo Arozamena (Abraham Van Helsing), and Pablo Alvarez Rubio (R. N. Renfield).

Not all was smooth sailing. In 2008, at the age of 98, Tovar recalled the vampire-like hours the Spanish-language cast and crew kept, plus another slight detail…Melford didn’t speak Spanish.

Despite any difficulties during the shoot, the Spanish-language version has everything the English-language version has, and more. The camera shakes off that early-talkie stasis and actually moves, following characters in pans or swooping tracking shots. The lighting is more complicated and the scenes which rely on effects are technically better; for instance, when Dracula appears out of a cloud of smoke. Tovar’s characterization of Eva is more dynamic, and she was given a more realistic wardrobe, than Chandler as Mina.

The only deficiency in Drácula is unfortunately…Dracula himself. Villarias’ performance, especially when compared with Lugosi’s, seems exaggerated and tends to evoke more laughter than fear. When I saw the film on the big screen a couple of years ago, the audience couldn’t help but laugh, during even the most suspenseful and/or horrifying scenes. I guess it could have been just a bunch of people catching the giggles from each other; you can judge for yourself . [Edit: It’s no longer on YouTube, watch for it at your local arthouse.]

Villarias aside, Kohner certainly delivered value for money at Universal. Drácula cost just a tenth of what the English-language version had. Though it disappeared for a while in the mid-twentieth century, a revival in the 1990s returned it to prominence and many critics now rate it more highly than its English-language counterpart.

According to Michael Mallory, writing in Universal Studios Monsters: A Legacy of Horror, Kohner had another motive besides saving money for making Dracula in Spanish: preventing Lupita Tovar from resuming her career in Mexico. Mallory maintains that Kohner was “madly stricken” with Tovar, who wanted to pursue opportunities at home, and that the producer’s thrifty idea was at least in part a scheme concocted to keep the beautiful actress in the U.S. and on the lot. Whether this is true or not, Kohner and Tovar married in 1932 and remained together until Kohner’s death in 1988. Their daughter, Susan Kohner, who played Sarah Jane in Imitation of Life, had two sons — Paul and Chris Weitz, the writer/directors responsible for About a Boy, In Good Company, and yes, American Pie.