One of the major problems with war movies is they can tend to be a little revisionist – or blatently laced with nationalistic propaganda – to the point that they shouldn’t be taken too seriously by any discerning future filmgoer. Strangely enough, an exception to this rule is an epic Chinese film made in 2009 about a seminal event which took place in the lead up to the Second World War. A masterpiece in every sense of the term, Lu Chuan’s poignant City of Life and Death is a worthy entry in Paula’s Cinema Club’s Future Classic Movies blogathon.

When it comes to military atrocities of the 20th century, not too many can top the brutality of Japan’s invasion of the Chinese city of Nanking during the late 1930s. In the six weeks following Nanking’s capture in mid December 1937, the Imperial Japanese Army systematically killed somewhere between 250,000 and 300,000 people – including an estimated 57,000 prisoners of war on the banks of the Yangtze River in what has since been coined the Shaw String Massacre.

While this infamous mass murder of unarmed POWs does not occur until a third of the way through City of Life and Death, it more or less serves as a starting point for the remainder of the film’s grim narrative, which concerns itself not only with the plight of Nanking’s remaining citizens as they are forced to endure the barbarous and cruel occupation, but also the reaction of the invaders to their own behaviour while they execute their savage agenda.

As it works its way towards the Yangtze River slaughter, the movie follows the fortunes of two brave soldiers – Chinese lieutenant Lu Jianxiong (Liu Ye) and Japanese super private Kadokawa Masao (Nakaizumi Hideo), both of whom are key figures in a final, but somewhat futile, skirmish before the city’s inevitable capitulation. 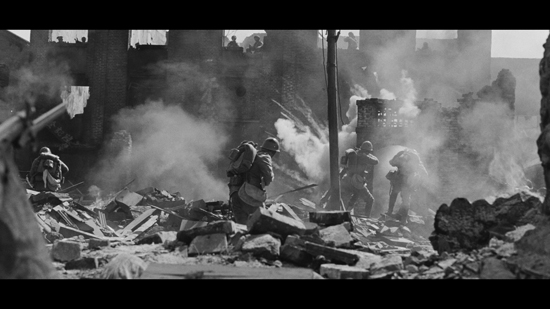 The story then focuses on the dismantling of the Nanking Safety Zone – a 3.85 square kilometre refuge that had been set up by a group of foreign interests led by German (and Nazi) businessman John Rabe (John Paisley) just before the invaders arrived – after its inhabitants are betrayed by Rabe’s Chinese business assistant Tang “Mr Tang” Tianxiang (Fan Wei) as he attempts to negotiate his family’s passage to safety. (Interestingly the real life Rabe has been credited with saving 100,000 Chinese lives, putting him in the same league as fellow countryman Oskar Schindler, although the film does not really dwell on this point.)

By dividing the film into these two parts, writer/director Chuan convincingly paints a comprehensive picture of war at its very worst – firstly via one of the grittiest combat scenes seen in the cinema since the fight for Ramelle in Steven Spielberg’s Saving Private Ryan, and then through the painful depiction of the Japanese occupation in which women are procured as sex slaves and repeatedly raped, prisoners are hung and/or beheaded (or, in one painful sequence, buried alive), a small child is ruthlessly thrown from an attic window, and injured soldiers are summarily executed in cold blood by makeshift firing squads.

Had City been in the hands of a lesser filmmaker, it’s possible that it might not have fully recovered after Jianxiong’s execution, such is the strength of Liu’s opening performance as the battle hardened Chinese soldier who, along with a few others, initially tries to stop most of his comrades from fleeing the city before making a desperate final stand against the Japanese invaders.

There are, however, too many other good things working for the film which keeps it in masterpiece territory for its two hour-plus running time. These include its stunning black-and-white cinematography (by Cao Yu and He Lei), its set design of mass destruction, as well as the strong performances of the supporting cast – perhaps the most noteworthy being Fan (as the hapless collaborator who ultimately redeems himself), Qin Lan (his wife “Mrs Tang”), Gao Yuanyuan (as Jian Shuyun, one of the zone’s Chinese administrators who defiantly stands up to the occupiers) and Japanese actor Kohata Ryu (playing the brutally pragmatic Second Lieutenant Osamu).

If anything, sitting through City of Life and Death is sort of akin to watching an extended version of the sacking of Vladimir by the Tartars in Andrei Tarkovsky’s 1966 classic Andrei Rublev. At the end of the day it’s not so much the human spirit that triumphs, but rather the horror.

3 thoughts on “Future Classic Movies: CITY OF LIFE AND DEATH”